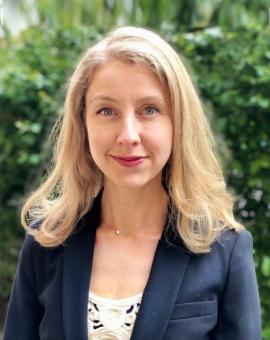 Adina Trunk is a close adviser to the Secretary-General on strategic and operational matters, and provides him with support in the implementation of his mandate. As the Chief of Staff, she coordinates and oversees the work carried out by the Secretary-General’s Office and liaises with directors and other senior management members to ensure fluid communication and information sharing between the different teams of the Institute. She is entrusted to provide input to strategic projects and maintain an ongoing engagement with external stakeholders such as Member States, the Institute's partners and donors. She supports the Secretary-General’s efforts to expand the Institute’s visibility and network and strengthen its relationships, including with current and future donors.

Prior to working as the Chief of Staff, Trunk was the Special Adviser to the Secretary-General. She originally joined International IDEA in 2016 to work on democracy analysis and assessment within the Democracy Assessment and Political Analysis Unit. As a Senior Programme Officer, she was part of the core team leading the development of the first edition of The State of Global Democracy Report of International IDEA.

Before joining International IDEA, Trunk worked for more than 15 years with democracy development, political parties and gender, mainly in the Eastern Europe and Eurasia region. As the programme director for Eastern Europe at the Swedish political party foundation (KIC) Sweden, Trunk worked with political opposition parties from the Balkans, Belarus, Georgia, Moldova and Ukraine. Prior to this, Trunk worked as a gender and policy adviser to Members of the Swedish Parliament, as a strategic adviser for political leaders in Eastern Europe and as a programme manager for global development projects at the Swedish Postcode Foundation. She also has experience from working at the European Parliament and the French Embassy in Stockholm. Trunk also held several board positions in democracy-related organizations, including EPP Women, Robert Schuman Institute, and Östgruppen for democracy and human rights.

News Article
From hashtag to change: why #MeToo matters for democratic politics
Mar
05
2018

The Global State of Democracy.